It has been a month since we gave birth to our beautiful, sweet Addie. Everyone has a birth story, and Addison is no different. I have been avoiding her birth story for several reasons. If you’ve been following my blog, you know that I had a very hard time with my pregnancy. I thought for sure I’d have a break with my delivery, but that didn’t happen. Having a preemie might be a whole other blog post. But I’ve also waited to tell her story because I wanted to find the positive and beauty in welcoming her to the world. I want to remember the good and hope that the bad has faded by now.

Tuesday, March 20th, I woke up feeling mildly “crampy.” My cramps didn’t feel anything like the contractions I had been having for the last 4 weeks. Instead, Doug stood at the end of the bed asking me over and over again if he should go to work. I really didn’t know what to tell him. After about two hours of debating, we finally decided to call the doctor and see what he thought. They told us to get to the hospital right away. This was around 10:30am. We had a little drive ahead of us, and we were admitted at 11:30. I was 3cm, but since I was “high risk,” they kept us.

I told them that I wanted an unmedicated, natural birth. Just as I had with Emma. We were all convinced that this would be even faster and easier than Emma. My total labor with Emma was about 5 hours and very easy. It was also relatively painless compared to what was about to happen.

I was going to be checked every hour to see how my labor was progressing. It was turning into a very slow process. We walked the hall for hours trying to get things going. Every hour I was sadly disappointed that I wasn’t farther along than I thought. At about 5:30pm I was only 5 cm and in a lot of pain. I could no longer talk and though I was insane for thinking I could do this naturally. My doctor decided to break my water, convinced that this was going to speed things along. I remember he looked at Doug and said “no more than an hour and a half.” To me, that was eternity. I wanted it to end, and knew I wouldn’t make it another hour and a half.

After he broke my water, things got very real very fast. I hit 7cm in no time but the pain was outrageous. My doctor knew that my labor with Emma was very short and was sure I could push through from 7cm. At 6:30pm a team was brought in and I started pushing. With Emma, I think there were 4 people in the room. With Addie being so early we had a pediatric team, plus we were in the middle of a shift change, so there were about 10 people this time around. I didn’t care, I wanted it over with. I realized halfway through this process, I’m not as strong as I thought. I started to give up just when my doctor told me she was stuck in my birth canal. Somehow I had to find it in me to push like never before. Thank God I had several sane people helping me out, because I checked out. I couldn’t do it. I was thinking horrible thoughts and was no longer an active participant in this game of life. If it wasn’t for my nurse, who had been with me all day, I don’t know if I could have done it. It was her stern voice telling me to listen to my doctor that brought me back to reality. I finally gave it everything I had, and was able to give one more push. Just what we needed to get Addison into this world.

I was so out of it at that point, I don’t really remember the specifics of what happened from there. Addie was brought to my chest immediately but she wasn’t very responsive or breathing well. The pediatric team that was standing by came over and started rubbing her vigorously with warm towels. She finally let out a small cry, but for the most part, she was quiet. This is very common with premature babies. Surprisingly, she was big for being premature. She weighed in at 6lbs 13 ounces, 20 inches long.

All those months of misery replaced by love in just minutes. That is all I felt when I held Addie. I didn’t remember the sickness, the bed rest, injections, countless pills, weekly vaginal ultrasounds, or the horrific labor that left me battered and bruised. None of that mattered anymore. We had our second, beautiful baby girl.

Our road so far has been very rough. I’ll tell you more about that later. But today, Addison is one month old. It has been both the longest and shortest month of my life. I am happy to say that she is finally a healthy 7 pound, 13 ounce baby!

Happy One Month Birthday Addison! We love you! 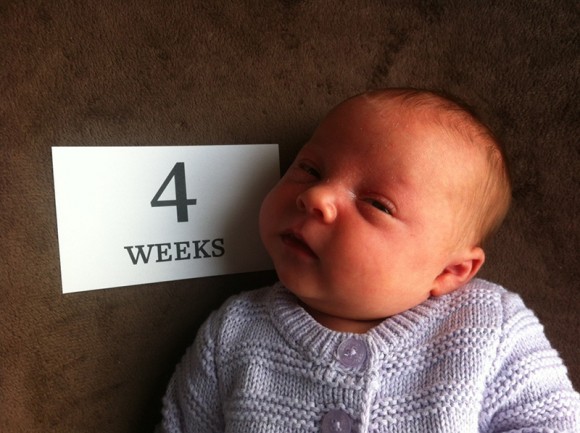