No more waiting, Emma Bowman is here. I had the most unbelievable labor story. And I love telling it. It just happened on Monday but I already feel like it was a lifetime ago. I was sure that I was going to have a long hard labor, finally resulting in a C-section. Little did I know, it would be polar opposite of what I expected.

Last weekend, Doug and I spent our time relaxing and wandering around town getting last minute things done. We were home on Sunday night when I posted a twitter message: “Watching the Olympic Games, wishing I would go into labor.” Be careful what you wish for! At about 1:30am I woke up, needing to use the bathroom. What I didn’t expect was my “water” leaking. I went in and woke up Doug. It took a lot of convincing him that I was truly going into labor. I was, after all, two weeks early, and had just been to the doctor a few days before.

Doug called the doctor and our doula to let them know. Our doctor said to go to the hospital to “get checked” at about 9:00am if I still hadn’t had contractions. Our goal was to labor at home as long as possible before going to the hospital. Our doula had encouraged us to get some sleep since it might be a while before contractions started.

As soon as we got off the phone with the doula, I felt my first contraction. It was 2:15am. Doug still wasn’t convinced that this was real labor. I was. My contractions were very irregular, but boy were they strong. We called the doula again about two hours later to give her an update. By then I was trying all different positions trying to get comfortable. At 5:30am I wanted to get into the shower. We called our doula and asked her to come over.

At this point I had decided that maybe our natural birth plan wasn’t for me. I kept telling Doug that I was done and wanted to go to the hospital for the epidural. He wanted me to stay in the shower as long as possible and wait for our doula to arrive. I just wanted out of the shower and get to the hospital! By the time our doula got there she also thought the hospital was a good idea. Even though my contractions were irregular she thought we should go.

On the way to the hospital my contractions were beyond painful. I knew that I couldn’t do it anymore, and was fine with the epidural. I had given it my all. We were almost to the hospital when my “water” officially broke, yep in the car. We arrived at the hospital at 6:55am. I was wheeled up to the labor and delivery unit and put into a room. A nurse immediately checked me, and with a slight panic in her voice, she told everyone there I was fully dilated and ready to push. Our doctor had just been to the hospital and was on his way back. He arrived just in time to deliver Emma.

Emma Maxine Bowman was born on August 11th at 7:55am. Total labor time was 5 1/2 hours. I couldn’t have wished for a shorter labor. I’m just grateful for all the people who helped bring her into this world safely. 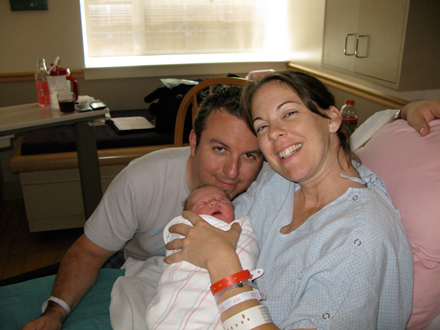