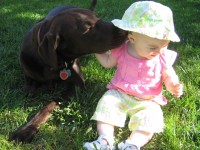 Doug has always wanted a dog. He never had a dog growing up and couldn’t wait until he was able to have a dog of his own. I grew up with several Labradors and had hoped one day to have another. It was just a few months after we got married when Jackson came to live with us. Jackson is a unique chocolate lab to say the least. He is a faithful dog with high energy and stamina. He can fetch and chase a ball until the sun goes down. That’s about it as far as lab traits go. He is finicky, too hard to pet, and barks at everything that moves. We were a little concerned how he was going to react once he found out he would be sharing his dad with a baby.

Over the last few weeks the two of them have become fast friends. Jackson shows his love by licking your ear. If Jackson licks your ear you know he loves you. Jackson has been sniffing Emma for a while now. We’ve been watching them closely lately. It wasn’t until yesterday that Jackson decided Emma was worthy of a good ole ear licking! It must be love.